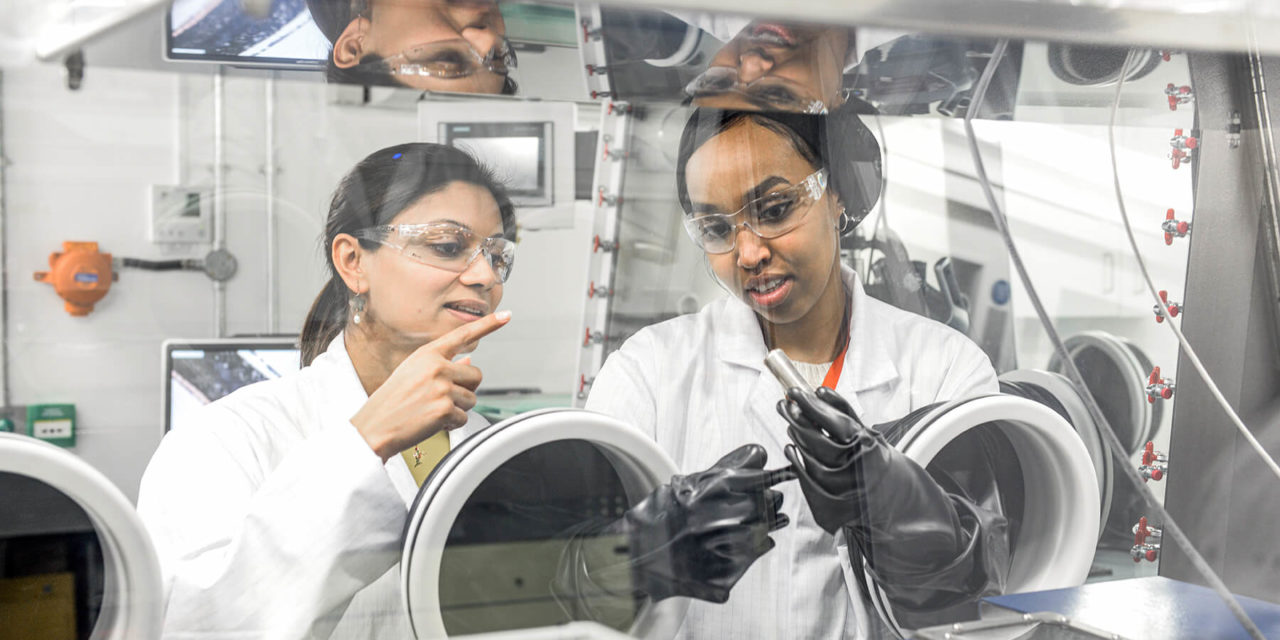 We can quit oil but only if we actually want to

Energy security, air quality, climate change and soaring costs mean the era of fossil fuels may be coming to an end. Electrification powered by clean, renewable energy is now technologically possible. But the transition will only happen if we stop burning hydrocarbons and start scaling battery supply. 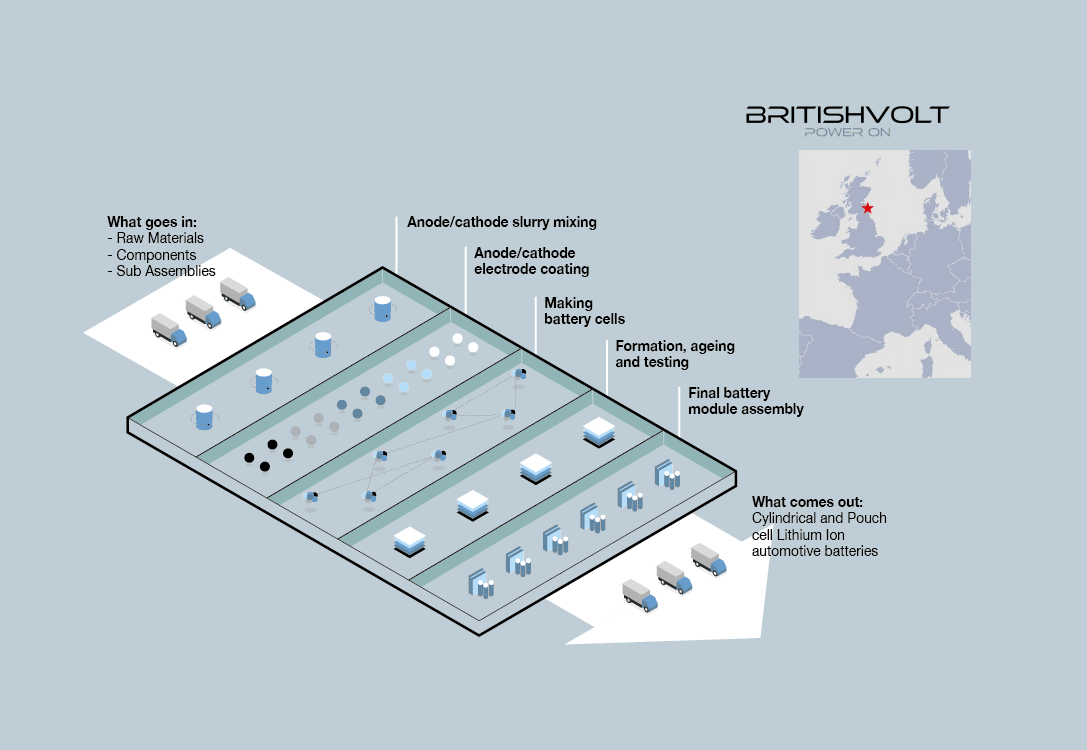 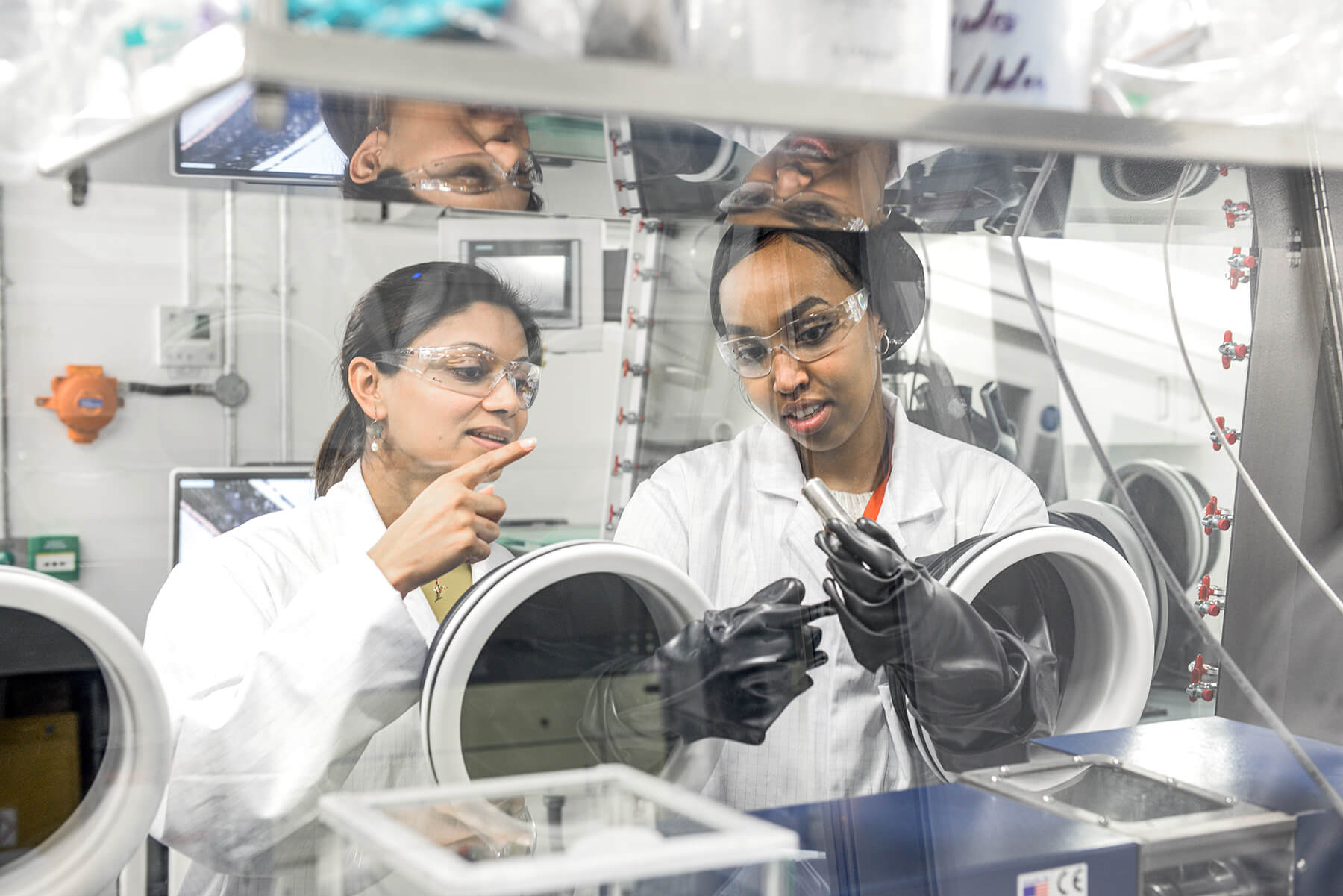 Above: As a result of the EU-UK Trade and Cooperation Agreement, the manufacture of batteries and of cathode materials will need to move from Asia to the UK or EU by 2027 to benefit from tariff free trade. This presents a real opportunity to establish battery manufacturing and its supply chain in the UK in the next five years. The Midlands has risen to this challenge, and as well as having vehicle manufacturers investing heavily in electrified vehicle models and their associated R&D, the region is home to the national battery scale-up facility at WMG, University of Warwick, adjoining industry and academia to develop and prove out new battery technologies. Credit: WMG

An awful lot depends on batteries. Energy from offshore and onshore wind, solar, geothermal and tidal must be stored in large battery storage systems. Without these, there will be no successful energy transition. It’s that simple.

But batteries are complicated and heavy and getting them to market is a challenge. Shipping them from China in diesel boats isn’t an option so we need to make them here in the UK. The raw materials need to be sourced responsibly and sustainably, and how much carbon must be precisely calculated. It’s pointless buying a ‘green’ EV and having to drive it 50,000 miles to offset the embedded carbon.

These will be some of the cleanest batteries in the world made in one of the world’s cleanest battery factories here in the UK. The North East already has the Envision factory, producing battery cells for Nissan’s Leaf and new range of EVs, and there’s the possibility of another gigaplant in Coventry.

By 2027, because of the post-Brexit Rules of Origin, UK built cars must source a large proportion of their components from domestic suppliers if they are to be sold tariff-free. With batteries representing at least 50% of that componentry, the cells must be made here. No domestic battery manufacturing industry means no domestic motor industry.

There’s a tearing urgency to this. There may be lots of activity but the brutal truth is the UK is behind Europe and needs as many battery factories that can be built.

Professor Colin Herron of Newcastle University agrees. “We know what’s required in terms of battery plant numbers and supply chain, but the key is how we deliver what is required and in a coordinated way,” he says.

“The North East of England is the home of the UK’s first gigabattery plant, soon to be joined by two more much larger plants (AESC and Britishvolt) and is responding to the challenge. The North East Battery Alliance is made up of all five regional universities, the Faraday Institution, manufacturers and the public sector. The role of NEBA is to build the supporting ecosystem covering inward investment, skills and funding.”

Andy Palmer, chair of battery manufacturer Inobat and pivotal in launching the first Nissan Leaf, is concerned. “Today, almost all EV batteries are made in Asia and have some degree of Chinese content,” he explains.

“The geopolitical risk of this cannot be overstated. Battery power is the new oil. Without four to six gigafactory’s in the UK, we will ultimately see OEMs deploying their new vehicle platforms away from the UK. OEMs will not source in the UK just because of UK content; to be competitive in the UK, incentives at least equal to those of the EU are required.

“The deployment of new energy vehicles, investment in gigafactories and EV technology, is the UK’s last chance to reverse a 50-year decline in its global market share of vehicle manufacturing… 800,000 UK jobs depend on it.”

But EV sales are rising fast hitting a record 39,315 registrations in March 2022, the best performing month on record and up 79% from a year earlier. In 2015, plug-in cars represented just 1% of the new car market. This February they had hit a 17% market share in the UK and 20% in Europe.

The much-questioned government deadline of 2030 for the ending of sales of new combustion cars and vans in the UK doesn’t look so impossible now. With such exponential growth, experts are predicting 50% electrification of new car sales as soon as 2025. Even sooner if supply chain constraints on raw materials and semiconductors can be eased.

To cope with EV growth mandated by the government, the issue is not demand but supply. Waiting lists for some EVs are a year or more and consumers won’t wait for extended delivery times and may take the easier diesel option instead.

Ian Constance, CEO of the Advanced Propulsion Centre, says we need to invest more in UK EV manufacture. “The automotive industry is adapting to a world powered by batteries. Today, we have a car industry that, pre-pandemic, was producing around 1.7 million vehicles a year, and importantly, 2.5 million internal combustion engines – many of which are exported,” he says.

“To enable that transition to a world where vehicles are predominately battery-electric or hydrogen-electric, we should invest in EVs and their supply chains now – including batteries. Then the UK will not need to import them from overseas. Thousands of well-paid jobs will be gained in the areas across the UK that need them the most. All the fantastic innovation, technology and productivity remain here, and the economy will benefit.”

Britishvolt, and others including AMTE, are going through crucial research and development ahead of building new plants and production-testing their manufacturing processes. Aiding these efforts is one of the strongest battery ecosystems in the world.

The UK has consistently been at the leading edge of developing battery technologies, from inventing the lithium-ion battery in Oxford in the 1980s to more recently investing in the £318m Faraday Battery Challenge, the UK Battery Industrialisation Centre (UKBIC) manufacturing scale-up facility in Coventry, and the Faraday Institution with a research community of more than 450 battery experts.

With the deadline for the end of ICE production approaching, speed to market for battery manufacturing is crucial. Taking advantage of the prototyping work already taking place in the UK allows Britishvolt to increase its speed to market and create batteries with longer range, shorter charging times and greater life cycles.

Richard LeCain, head of cell and process development at Britishvolt, says its work at UKBIC has already provided invaluable. “Without UKBIC, we would have needed to build this prototype line ourselves, spec out all the equipment and get it all validated. Having all that in place with staff ready to engage with us has really cut down our development timelines,” he explains.

Having that class-leading R&D battery ecosystem means that battery chemistries will change. The days of the one-size-fits-all proprietary battery largely produced by Asian manufacturers are coming to an end with automakers demanding bespoke batteries for performance and luxury car applications.

Britishvolt has signed agreements with both Aston Martin and Lotus to create next-gen cells with greater levels of performance and energy density. These new chemistries will trickle down to make battery technology better, more powerful and ultimately cheaper. New materials like sodium-ion and silicone may change battery performance significantly and reduce the reliance on raw materials like cobalt and lithium. Recycling will also be a key enabler.

James Gaade, head of programme management at the Faraday Institution, highlights the benefits of the current high levels of UK battery R&D. “Considerable gains will continue to be made in the performance of Li-ion technologies, particularly from refinements to the chemistry of the cathode (for example, Li-rich cathodes) and use of smart electrode manufacturing techniques,” he says.

“Longer term, a step-change in performance will come from deployment of next-generation battery chemistries, tailored to specific applications, lithium-sulfur for aerospace and sodium-ion for low-cost mobility and static storage, solid-state for high-end automotive.”

“By taking advantage of existing strengths and encouraging cross-sector collaboration, combining academic and industrial expertise, the UK is in a strong position to be at the forefront of these emerging markets,” he continues.

“There is increasing awareness around the need for this to be a truly sustainable industry – taking a joined-up approach to materials selection and sourcing, design for recycling and materials recovery at end of life.”

A potential hurdle to creating batteries on mass, domestically in Europe and the UK, is local refining capacity. Currently, European battery and electric vehicle manufacturers are reliant on products produced exclusively outside of the EU, the majority coming from Asia.

The high-quality chemicals required have a limited shelf-life and are susceptible to corrosion while in transportation. Both are factors which impact quality. Luxembourg’s Livista Energy is looking to solve this by building Europe’s first standalone Lithium Conversion Facility.

“The key of successful refining in Europe are the partnerships forged with producers, to have transparent supply of the best minerals, in order to achieve battery grade lithium chemical. Collaboration and strategic partnerships are key to a successful energy transition,” says co-founder Roland Getreide.

Once operational, the planned initial capacity of the plant will be 30,000 tonnes a year, ramping up to 60,000 tonnes in line with the market growth.

Likewise, the Phillips 66 Limited Humber Refinery is the only European producer of synthetic graphite coke, which is crucial for the anode part of the lithium-ion battery used in electric vehicles and it’s currently all exported to battery manufacturing in Asia.

However, Simon Holt, manager of emerging energy (Europe), sees the fantastic potential of growing the local supply chain in the UK and Europe, where the buisness is keen to engage with local partners to support the UK government’s Green Industrial Revolution plan.

“Phillips 66 Limited’s Humber Refinery currently produces enough synthetic graphite coke to meet the demand of all UK and European EVs until 2030, and we are actively looking to grow our supply beyond this baseline, along-with other Emerging Energy projects like green hydrogen and carbon capture helping to reduce our production carbon emissions at the same time,” says Holt.

Longer-term, hydrogen may have a role to play but as economies buckle under soaring energy costs and rising global temperatures bring more extreme weather, creating an energy system powered by batteries that store cheap, renewable and sustainable electricity seems like a shrewd move. 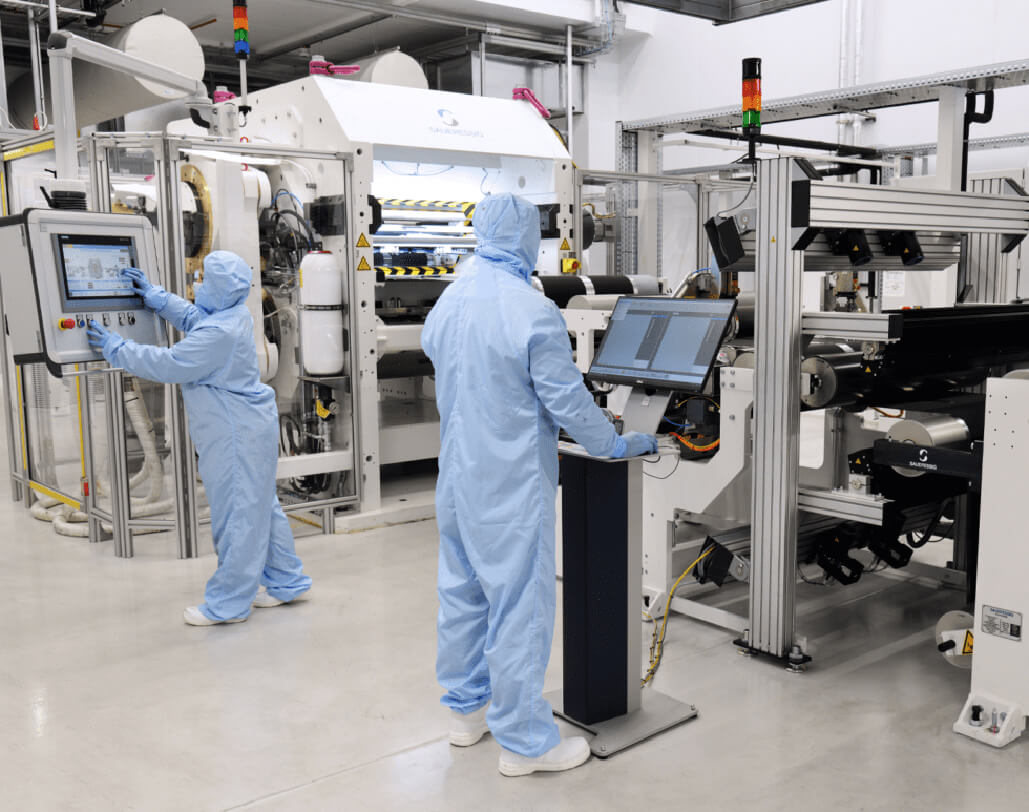 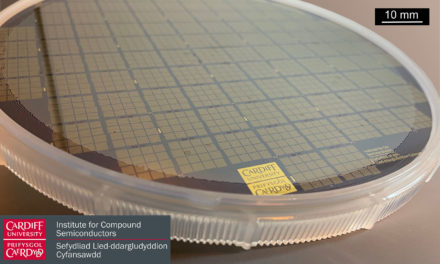 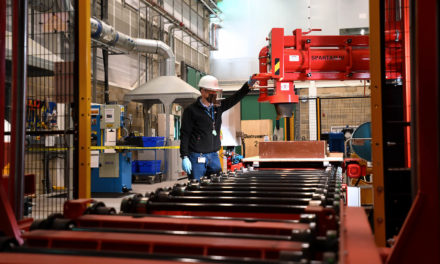 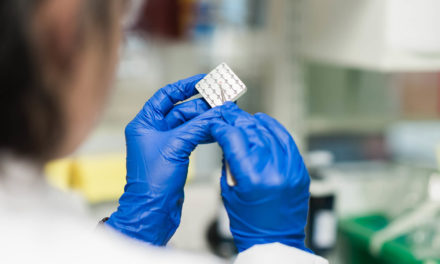 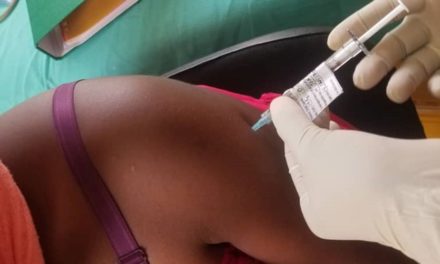